ROUND VII OF PRB AFTER PARTY ANNOUNCEMENTS : DAYS N’ DAZE 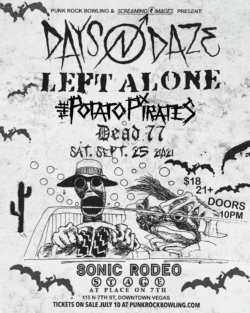 Someone better Call in the Coroner cuz this show is gonna be killer!

Kings and Queens of DIY thrashgrass, Days N’ Daze are heading back to PRB with friends and fellow DIY band, Left Alone in tow! Left Alone hasn’t made a PRB appearance since 2017 so it’s about time we had them back!
Thinkin’ Bout Drinkin’? Well, “It’s been a shit month boys. It ain’t been a good year either!” so what better way to washaway the times than with everyone’s favorite drinking band, The Potato Pirates!
Dead 77 are self described as a Los Angeles by-product of Reagan era hardcore, broken bottles, razorblades and a pension for fast living. Sounds like a great way to get this party started so get there early and don’t miss their PRB debut!