ROUND IX OF PRB AFTER PARTY ANNOUNCEMENTS : MDC 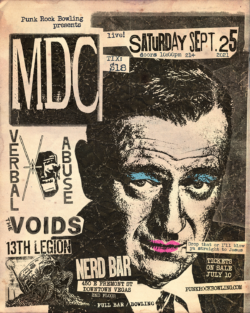 Hardcore punk rock is a term that gets thrown around lightly these days, but let’s talk REAL Hardcore Punk as we present you with the politically vocal, socially active, Godfathers of saying what the fuck is real, MDC! They aren’t shy about their stance, never have been and never will be, and this is why we love them. Another hard hitting bay area hardcore band via TX, comes Verbal Abuse who are so notorious, even Slayer covers their songs! SoCal representing with The Voids! Lead singer Adri takes us back to an early 80’s sound reminiscent of Red Scare or early Black Flag (and they do an awesome cover or Reagan Youth’s ‘Are you Happy’)!
And to kick things off, we present straight from the rock of Oahu, 13th Legion, who bring their island angst and rock n roll hardcore to PRB for the first time.