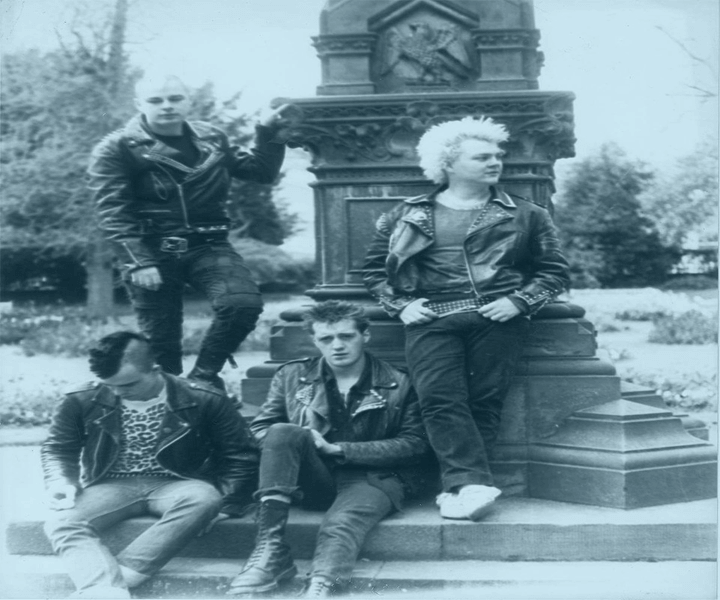 The Varukers were formed in 1979 in Leamington Spa.
The original line was Rat vocals, Bruce Riddel on guitar, Garry Moloney on bass and Tom Lowe on second guitar and some other guy called Garry on drums, around about 1980 the drummer decided he had enough and rode off into the sunset, so a reshuffle had to be done Tom Lowe went onto bass and Garry Maloney took up the drum duties.

The band started to gig and attracted the interest of a record label from birmingham (Inferno Records), in 1982 The Varukers unleashed there debut release to the punk hordes Protest To Survive ep, shortly after the record came out Garry Maloney (drums) left The Varukers to join Discharge, so a new drummer was brought in Brian Rowe (he is the one on the UK DK video saying its a cult figure) anyway we learnt some new songs and put out Don’t Wanna Be A Victim ep.
After this record was released Tom Lowe (bass) dropped out his replacement was George.

At this time we was getting a little bit pissed off with Inferno Records as regards the delays in putting out our records so we approached Riot City Records from Bristol to see if they would be interested in putting out our debut album Blood Suckers, they were and it was released in 1983.
George then decided he wasn’t interested in playing punk anymore so he left, Broken Bric was his replacement.
We did one more 7 inch Die For Your Government then Brian (drums ) wanted to develop his drumming so off he went to develop oh and Bruce (guitar had another kid) the one that broke the camels back so it was now Rat and Bric.
Drafted into the drum and guitar positions was two mates from Lichfield punk band War Wound, Andy Baker on drums and Damien on guitar and with this line up the band recorded the 7inch Led To The Slaughter and the much acclaimed 8 track 12inch Another Religion Another War, while recording the 12inch Bric announced that he was leaving the band (I think due to the piss taking of him cant remember what it was about,anyway Damien knew of this guy called Tony who played bass, Tony’s picture is on the cover of Another Religion, but he did not actually play on it, come to think of it Tony never recorded anything.

Anyway it was now 1984 and The Varukers embarked on there first European tour, it went well but some dealings were afoot because upon there return, Tony and Damien announced that they wanted to leave and form a new band (they became Sacrilege), so Andy Baker and Rat once again had to sort out new prey, they enlisted two guys from Wales, they were Paul Miles on guitar an Graham Kerr on bass once the set had been learnt the Varukers ventured back over to Europe along with the Mau Maus from Sheffield.
Driving Mau Maus around was a guy called Dunk he owned Rot Records he wanted to do some stuff with The Varukers so the band put out the Massacred Millions 12inch and a rather rough recorded live album Live In Holland, anyway this was now late 1984.

After these releases Andy Baker decided he wanted to team up with his old mate Damien so he and joined Sacrilege (some mates, 2 years later they got rid of him) anyway not to be deterred by this latest departure (I mean there has been quite a few and please keep on reading it gets worse) the band then had a guy called Gilb for a few months but things got in the wa,y pregnancy, work and travelling, so his replacement was Warren from Rochdale.
He played on the 1985 release One Struggle One Fight, and as if we haven’t been having enough trouble to keep 4 people together we decided to add a second guitarist(Gluttons for punishment or what) we had our eye on a lad from Northampton punk band Death Sentence, Biff, so he joined us, family problems arose for Warren so he returned to Rochdale, then Kevin Frost joined us on the drums.

We did a couple of good shows with Discharge well we was good, Discharge was doing all that Grave New World shit. and a couple of shows with GBH, we started to sort out some new material and then it all went tits up we split up this was about late 1988 or early 1989, even though we had split up we was still getting a lot of letters and support for the band from all around the world, anyway

I think about 2 years or less had past, when biff got in touch with me and mentioned that The Varukers should get back together, Biff would play guitar, Rat vocals, Kev Frost on drums and Biffs mate Brian on bass (This was the longest running and most stable line The Varukers ever had) we recorded and released the 7inch Nothings Changed (cos nothing had, the music, the attitude, the under pants) on weird records and it sold well.

Nothing’s Changed let people know we were back and offers of tours came flooding in, the bands first American tour in 1994, a tour of Japan, the momentum was growing, we signed to We Bite Records from Germany and released Still Bollox But Still Here, new versions of some of the bands early materials that a lot of people could not get hold of the originals, unless they wanted to get ripped off by record dealers

Next we recorded an album of new material, Murder, it was released on We Bite in Europe and Asylum Records in the USA, for a while the line up stayed stable but then the curse once again raised its ugly head, Brian left the band and Kierran replaced him but not for long as he had to return to Canada due to family problems.
A few people stood in on bass to help do the tours, Les and Mark from Concrete Sox, Todd from Distraught (USA) then Kev got kicked out so Kenko from Swedish band Meanwhile and Justin from Iron Monkey filled the drum stool for a while, the band finally recruited Taff on bass (Chaos UK) and Kev came back for a while.

We then entered the studio and recorded the album How Do You Sleep, armed with this album the band returned to the States, went back to Japan did a tour of Australia and New Zealand, oh and did two tours of Brazil, the album was released on Go-Kart Records in the USA and Peculio Records in Brazil, Kev left after these various tours, his replacement on the drums is Ricardo from Portugal, the band have also added another guitarist to give them a more bollox his name is Shaun originally from Hard To Swallow.

There’s aBunch of stuff is to be added here soon!

The band are at present working on some new material hopefully for a possible release this summer, this is how the Varukers stand at present Rat vocals, Biff guitar, Brian back on bass, and good ol Stick Dickings of Doom fame on drums, by the time it took you to read this someone will have probably left!