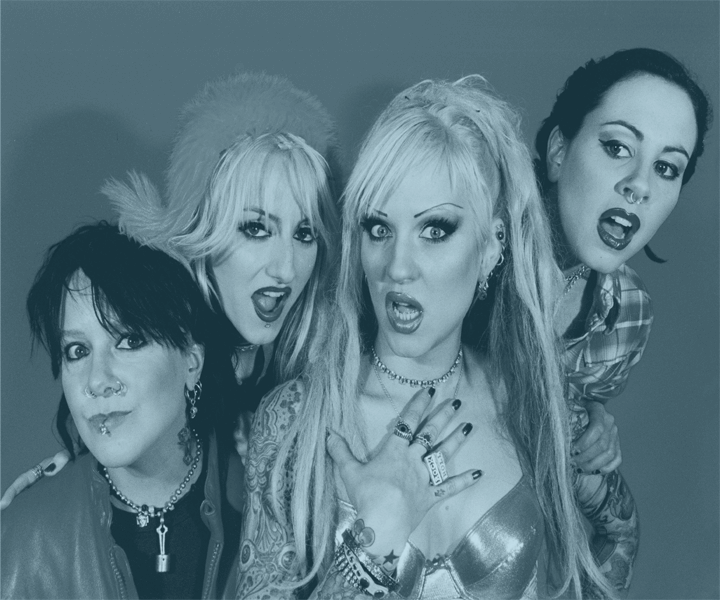 Start spreadin’ the news: Lunachicks have returned to rally the freaks, liberate ladyparts, and save the goddamn world. New York City’s premier punk rock performance artists will play Webster Hall on Saturday, April 11, 2020. Tickets to the show sold out instantly. Fans new and old can also look forward to the band’s forthcoming memoir, which will be published by Hachette in late 2021/early 2022, coinciding with the release of a documentary by director Ilya Chaiken.

Throughout the ’90s and into the ’00s, the Lunachicks’ hard-hitting rock-n-roll hooks, thick and gritty guitars, and heavy, pounding beats attracted a rabid fan base that stretched from the turbulent bowels of the Bowery all the way to the dizzying neon cavity of Tokyo.

Formed as teenagers at NYC’s famed LaGuardia High School, Lunachicks were on a mission to loudly trounce planet Earth just like their idols The Ramones, Black Sabbath, Kiss, The Clash, Blondie, and Alice Cooper. Early on, they made a name for themselves in hallowed local clubs like CBGB and The Limelight, where they caught the attention of Kim Gordon and Thurston Moore of Sonic Youth. In 1990, London-based record label Blast First released the Lunachicks’ debut album Babysitters on Acid.

With every album that followed, the Lunachicks delighted most in taking a technicolor dump on propriety, morality, and the patriarchy. But it’s their live shows that best demonstrate their outrageous brilliance. Reveling in their love of movies by Russ Meyer and John Waters, the Lunachicks are a ferocious burst of bizarre costumes, huge wigs, garish makeup, and prosthetics. The shows would be pure spectacle were it not for the band’s irrefutable mastery as musicians and performers.

For more than a decade, the ever-touring Lunachicks released five full-length studio CDs, a live album, videos, and countless singles. They appeared on compilation CDs and in films, and recorded a feature-length home video, as well as their own short film Nowhere Fast. The Lunachicks shared stages with The Ramones, Joan Jett, The Offspring, Marilyn Manson, Deborah Harry, No Doubt, The Buzzcocks, Rancid, NOFX, and The Go-Go’s to name a few.

Through the years, the band changed labels and made a few line-up shifts. After the departure of rhythm guitarist Sindi in 1997, the Lunachicks have remained a quartet. Theo (vocals), Gina (guitar), Squid (bass), and Chip (their drummer since 1994) honed their skills and matured into a tight sonic outfit without ever losing their satirical edge.

Since their hiatus began in 2004, the band members have kept busy. Theo’s been a party promoter and DJ, put out two albums, toured with her band Theo and the Skyscrapers, wrote and performed with Big Art Group, launched Armour Beauty lip gloss, became a professional makeup artist, and had a child. Gina released several new singles in 2019, which followed her debut solo EP, released two LPs with her band Bantam, scored a musical and several indie films, had gallery shows, and basically kept on creating music and art. Squid’s been a tattoo artist, restaurateur, entrepreneur, big boss coach, and general bad-ass. Chip designs and creates custom carpentry, and continues bashing away on drums and chugging beers.

The Lunachicks look forward to resuming their reign of terror. You’ve been warned.