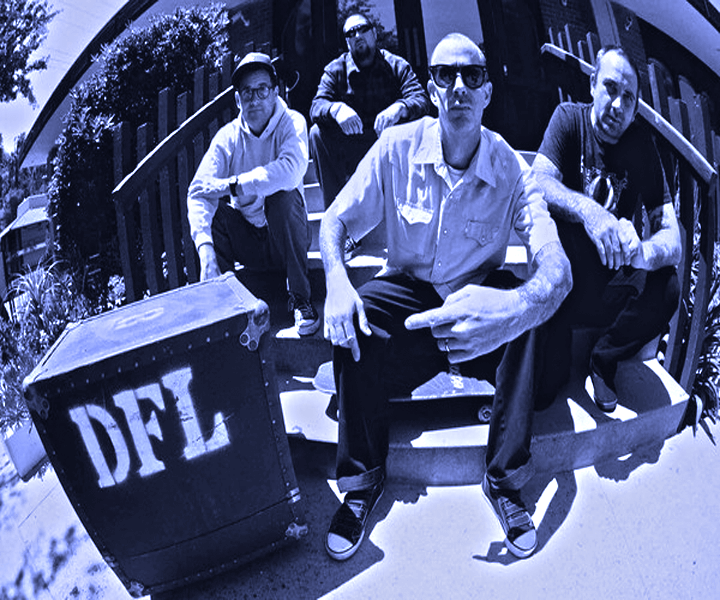 DFL became a household name among Beastie Boys fans when word got out that Adam Horovitz had played bass on their Grand Royal debut My Crazy Life (1993). Often ordered along with Luscious Jackson’s In Search of Manny, fans took a chance on Grand Royal’s first few releases and were not let down. DFL’s distinctive brand of California Hardcore earned the band a fan base that was every bit as dedicated as Luscious Jackson’s. Both bands joined the Beastie Boys on the 1994 Lollapalooza tour and proved that they were just as strong on stage as they were in the studio.

As is the case with many hardcore bands, DFL has gone through several musician line-ups. The creative heart of DFL has two lobes: vocalist Tom Davis, who is the brother of Tamra Davis, accounts for one lobe and guitarist Monty (sometimes spelled Monte) Messex is the other. In addition to those two, there have been a number of Beastie Boys band members from time to time in DFL; Tom’s brother-in-law Michael Diamond was momentarily in the band. Then according to the article in Grand Royal Issue #2, he was fired and replaced by Tony on drums because the rest of DFL did not like Diamond’s attitude. Adam Horovitz, who traditionally plays guitar for Beastie Boys, stepped in and played bass for DFL at a few shows. Later on, Amery “AWOL” Smith replaced Tony Converse on drums; however when Amery joined the Beastie Boys on tour in the spring of 1995, Tony rejoined DFL. This all is just the beginning of DFL’s ever evolving line-up though.

In need of a bass player, DFL asked Michael Diamond’s other brother-in-law Wag to step in for a concert performance. At the time, Wag was still busy with his band, Mary’s Danish, so that did not last for more than one show. The same can be said for Minor Threat bassist Brian Baker who also filled in when asked. Still within a degree of separation from the Beastie Boys, violinist Eugene Gore was hired to play bass, only to be replaced later on. According to the Grand Royal Magazine article of DFL, “…we tried Eugene, the violinist from Ill Communication, who was fine till he started playing the bass like a violin. Then there was Josh who got 86’ed onstage when we opened for Rancid, because he blew the intro to “DFL.” Finally DFL selected Tom Barta to play bass for them on the 1994 Lollapalooza tour.

By 1995 DFL had released their second full length album, Proud to Be (1995) on the Epitaph record label. Previously, Beastie Boys producer Mario Caldato Jr. had recorded the sessions which were assembled into My Crazy Life. On this outing though, Adam Horovitz produced the album which again ties DFL back to the Beastie Boys. In 1996, DFL hit the road and toured along with the band Biohazard. 1997 saw DFL heading back into the studio to record and release their follow-up Epitaph album Grateful. What started out as a great year for DFL fans ended with news that Tom Davis was tired of touring and that the band was going to break up.

Following the aftermath of the 1997 DFL break-up, Monty Messex went on and formed a new group named The Family Dog. With the end of the 1990s drawing near, Monty went back into the studio and recorded an entire album’s worth of material with his new band. The result was So Cal Hardcore (2000) put out on the El Pocho Loco record label. Even though Monty seems to be keeping busy by playing with The Family Dog, another DFL record seems likely. When Beastiemania.com asked Tom Davis about the likelihood of it happening (December 2002), Davis replied by saying “?r.u.down4life…d.f.l. 2005 ….?”