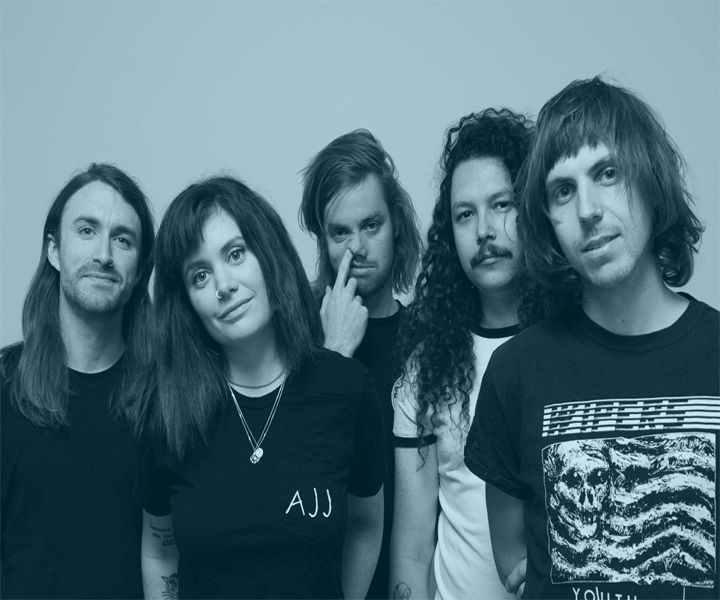 A punk band not bound by genre.

Clowns are enjoying a 9 year career that has bred 4 critically acclaimed records that blend punk with all flavours between psychedelia, garage, hardcore and power pop. It’s spawned countless tours the world over and found them playing everywhere between the world’s biggest heavy music festivals to your best mates backyard. It’s clear that Clowns are on an unstoppable and heavy loaded freight train of ascendancy with the end of the line in no clear sight.

facetiously naming themselves after some of the world most unlikable characters; Clowns have worn their DIY approach on their sleeve from day dot and sport some outstanding results. Their sophomore full length effort ‘Bad Blood’ was voted as triple j’s Short.Fast.Loud number #1 heavy release of 2015; it took them over the world to festivals like The UK’s Rebellion and Groezrock in Belgium and plenty of club shows in between. It found them on tour with some of the world’s most esteemed punk heavyweights such as NOFX, Rise Against and Descendent and subsequently went on to sell thousands world wide.

Their third full length ‘Lucid Again’ was a critically acclaimed hit with Rolling Stone stating “it’s hard to argue against Clowns having creates one of the best rock -not ‘just’ punk – records” of 2017. It was an affirmation of bands success with many of the songs receiving heavy radio play, creeping the bands name up festival bills over the world, selling out bigger venues than the band had ever before and eventually lead them to support Foo Fighters and play Australia’s inaugural Download festival.

Of recent, the band have expanded their services from wild, sweat drenched punk parties to manufacturing a launching pad for other aspiring musicians looking to navigate a similar route through their music careers. Damaged is a booking agency designed to support local artist build their profiles through the method that Clowns have done for so long. It is an emphasis on the concept of what Clowns believe makes music great. Nurturing artists from the grass roots level, Damaged books tours rooted with a DIY core. Driven by a motivation to progress and harbour symbiotic relationships, they have booked their artists everywhere between carpark shows and Splendour In The Grass, but most of all try to signify the importance of community vibe.

2019 has seen the band release their fourth studio offering ‘Nature/Nurture’, which caught the ears of punk heavyweight Fat Wreck Chords, making them the second Australian band ever to sign to the esteemed label. It’s an exciting time for Clowns as they gear up to take on the world once more with the new album that debuted at #6 in the Australian ARIA charts, has been dubbed “their strongest record yet” by Stack Magazine and is fast becoming their most streamed record!

It’s been an absolutely wild 9 year roller coaster for Clowns, but the ride is far from over! If you want to take part, admission is free and there’s no minimum height. Strap yourself in and enjoy the rush.