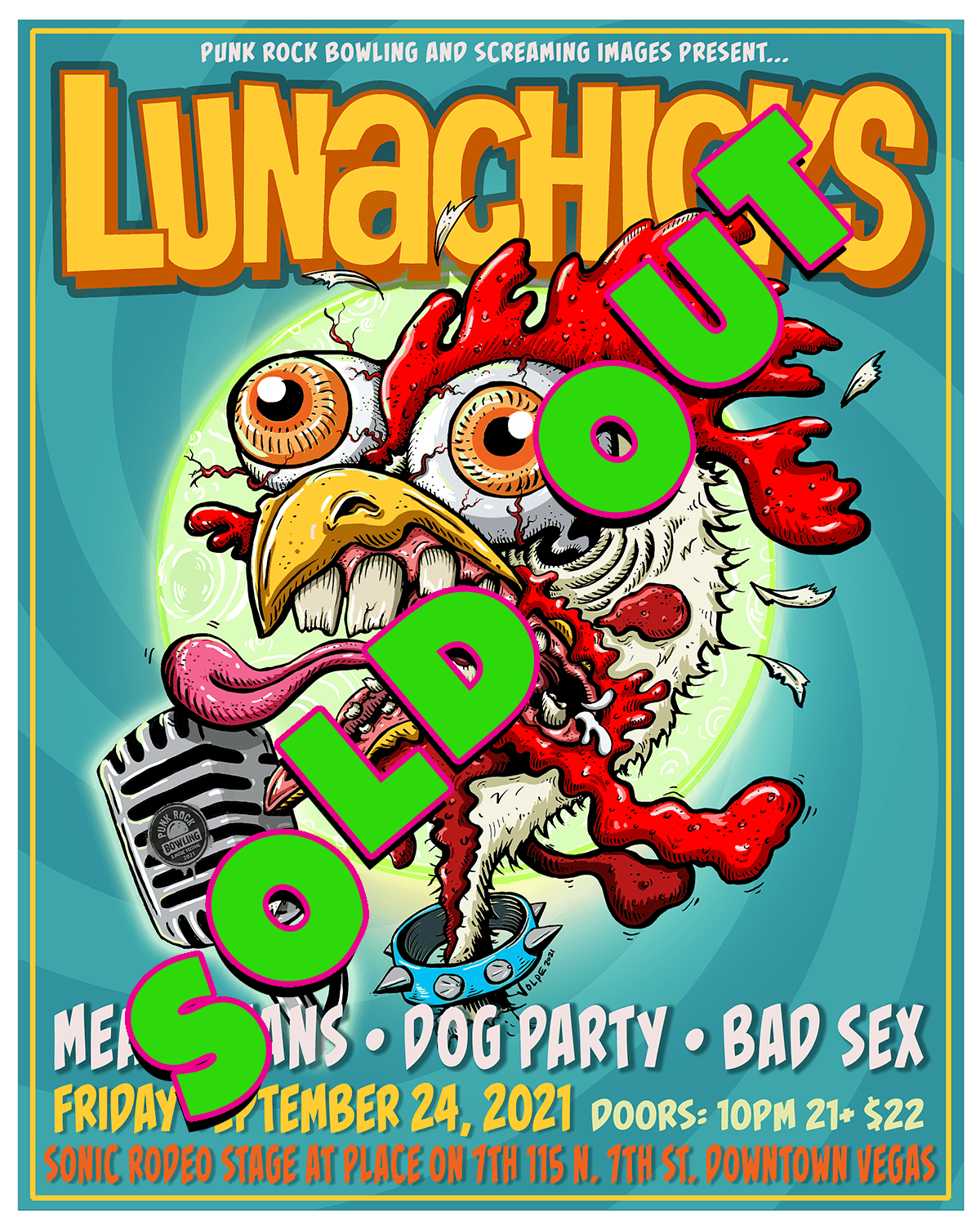 Start spreadin’ the news: Lunachicks have returned to rally the freaks, liberate lady parts, and save the goddamn world. New York City’s premier punk rock performance artists have added another appearance to reign terror on Sin City as the girls take a technicolor dump on propriety, morality, and the patriarchy. Reveling in their love of movies by Russ Meyer and John Waters, the Lunachicks are a ferocious burst of bizarre costumes, huge wigs, garish makeup, and prosthetics. The shows would be pure spectacle were it not for the band’s irrefutable mastery as musicians and performers. Come get intimate with the Lunachicks while you have the chance!

Also on this stellar lineup is the Mean Jeans, who hail from Portland, but with their 3 minute Ramones style blasts of pure punk genius, you’d almost think you were at CBGB’s circa the 70’s.
To keep things rolling, don’t miss the Giles sisters who comprise this ferocious duo Dog Party who blast out sounds reminiscent of the Buzzcocks meets White Stripes.
Fellow Oregonians, Bad Sex will bring just that to the party! Playing tracks off their latest album Wasted Time produced by non other than Joey Queer (and he’s picky so you better believe it’s good!)

This sick poster was designed by the spectacular artist, Gina Volpe of Lunachicks and will be available for purchase at the show!

*The following 3 Day Passes include a Code for the After Parties Presale:
ALL VIP 3 Day Passes
Tiers 1, 2 and 3 – 3 Day GA Passes (your ticket will state what “tier” you have)
Select Tier 4** 3 Day passes **Applies only to those that received an email from SeeTickets on May 29, 2020 stating that “we have granted you a code”**

Your unique ticket barcode number is your promo code and access to the presale.

We will be sending out an email to ticket purchasers that have After Party Presale Access with more information when it gets closer to the on sale date of July 10.

If you purchased a 3 Day GA Pass ON OR AFTER 6/1/2020, OR if you have a 3 day pass that states “NO After Party Presale Promo Code Included” then that ticket does not include a Presale code.

Single day tickets do not include Presale Access codes!

THE GOOD NEWS for people without the presale access: the After Parties rarely sell out during the presale so as long as you’re on your A game, you should still have a chance to get the tickets you’re hoping for during the public sale!